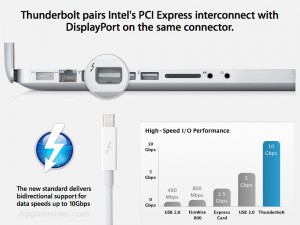 Thunderbolt is a revolutionary I/O technology that supports high-resolution displays and high-performance data devices through a single, compact port. It sets new standards for speed, flexibility, and simplicity.
Starting as a simple idea – to create an incredibly fast input/output technology that just about anything can plug into, Thunderbolt, also with FireWire, becomes one of the most popular and flexible I/O technology.
Thunderbolt controllers multiplex one or more individual data lanes from connected PCIe and DisplayPort devices for transmission via one duplex Thunderbolt lane, then de-multiplex them for consumption by PCIe and DisplayPort devices on the other end. A single Thunderbolt port supports up to six Thunderbolt devices via hubs or daisy chains; as many of these as the host has DP sources may be Thunderbolt monitors.
Based on the two main technology in your MacBook Air, MacBook Pro, iMac, or Mac mini, you are able to use the full capacity and potential of your system. Unlike FireWire, you can use Thunderbolt to connect external devices like Storages(RAID arrays) and video capture solutions directly to your Mac, use existing USB, even connect to Gigabit Ethernet and Fibre Channel networks — using simple adapters.
This ultra speed and flexibility is based on its two channels on the same connector with 10 Gbps of throughput in both directions. We can move data to and from peripherals up to 20 times faster than with USB 2.0 and up to 12 times faster than with FireWire 800.
Thunderbolt supports almost all kind of displays, which make it the most appropriate technology which ever exists.
Leveraging the I/O protocols on a single transport enables engineers to innovate new system design configurations, allowing for standalone performance expansion technologies that use existing native device drivers. Thunderbolt technology also enables the introduction of thinner and lighter laptops without sacrificing I/O performance, and extends to reach other I/O technologies by using PCIe-based adapters, making gigabit Ethernet, FireWire*, or eSATA easy to create.
Thunderbolt technology brings a new balance of performance, simplicity and flexibility to end users and product designers alike. As the fastest PC I/O technology leveraging two key technologies (PCI Express and DisplayPort) on one shares high-performance transport, Thunderbolt technology opens doors to entirely new system and product designs. 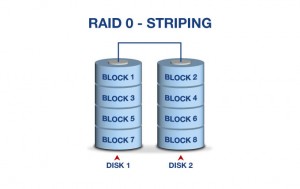 I decide to migrate my workstation to raid0, to get better performance.I used Carbon Copy Cloner software, to backup my current installation on another hdd.After that boot with installation disk ( in my case I boot installation over the network) and create stripped array ( it has to consist of two hard drives).I restored my installation over the raid0 array with firewire cable and carbon copy cloner, it works perfectly!!!

I run benchmark utility and here are the results. 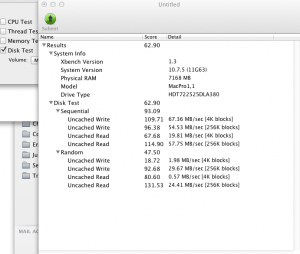 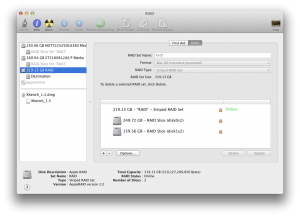 Now, the disk speed is improved 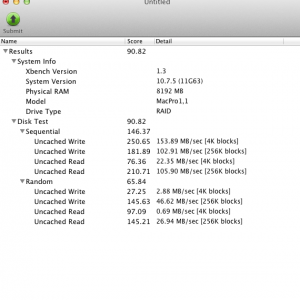 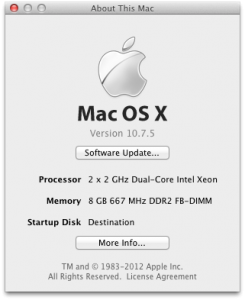